Unfortunately, some of the information consumers are getting is confusing, misleading, or just plain wrong. “We’re not just fighting an epidemic; we’re fighting an infodemic,” said Tedros Adhanom Ghebreyesus, head of the World Health Organization.

And it’s not just the public that needs help verifying and understanding information. Journalists need help, too. First Draft, a nonprofit devoted to combating misinformation, offers an online course for journalists covering the pandemic. And Poynter, early on in the pandemic, launched the #CoronaVirusFacts / #DatosCoronaVirus Alliance. Led by Poynter’s International Fact-Checking Network, the group unites more than 100 fact-checkers around the world in publishing, sharing and translating facts about COVID-19. 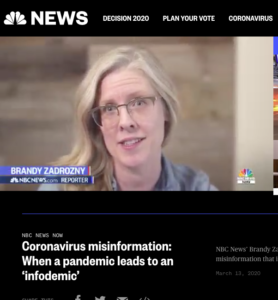 Some of the misinformation is being pushed by entities with political motives. Brandy Zadrozny covers that shadowy world for NBC News, and says readers are suddenly hungry for guidance. “I’ve reported on health misinformation for years,” said Zadrozny. “And to be honest no one really cared about it.” Now, though, she’s getting more traffic for her stories in a month than she had in the previous year, and producers who once regarded her stories as too abstract for TV are putting her on the air.

Reporters are also seeking Zadrozny’s help in understanding how misinformation affects other beats, like politics. Key to her work, she says, is “knowing who the major polluters are, where are the networks, what are the motivations.” When she hears about a new disinformation campaign bubbling up, she sets out to unwind the online relationships and networks making it happen. She found troll farms from Macedonia and the Philippines promoting false medical advice on Facebook, along with Facebook ads and conspiracy theorists pushing bleach consumption and useless UV ray cures. She’s also reported on how President Trump’s tweets have encouraged extremists.

While the workload can be exhausting, Zadrozny says that “in terms of satisfaction at my job and feeling really necessary for people’s health and for the future of democracy, that’s what you want as a reporter.”